Todd Collins is... The Chip Mack 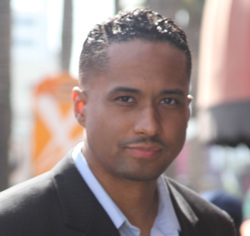 Mysterious.  Generous. Articulate. Nigga you play too much.  Have all been words and phrases used to describe Todd Collins.  While much of his origins prior to becoming the Chip Mack are unknown, there are some well documented facts that may help in understanding the enigmatic Todd Collins:

He was instrumental in getting the Truce of Nine Deuce to happen despite referring to everyone as "cuz."  Crips and Bloods included.

Todd Collins still has a velour short set that was obtained from the 1992 L.A. Riots.  Todd Collins now uses these as pajamas.  The shorts have become translucent with age and can be considered sexy attire if he does not wear anything underneath them.

His almost superhuman sense of taste and smell is a result of falling out of a bunk bed and breaking his nose in his sleep at 11 years old.  There is no other way to explain this and is indeed a medical marvel.

Todd Collins was an actor in high school with credits including "that black kid" on an episode of Picket Fences (CBS), "black kid friend #1" on Me and The Boys (ABC), "black basketball playing high school kid" in the movie House Arrest, and "ethnically ambiguous kid so let's make him Puerto Rican" on an episode of NYPD Blue (ABC}.

Todd Collins has recently resumed his acting career and his hoping to break his previous type of "that black kid in that one thing."

Growing up as a severe asthmatic, Todd Collins was hospitalized many times as a child.  These experiences have given Todd Collins a strong empathy for the sick and helpless.  It also provided Todd Collins with hours and hours of watching television and listening to music, giving him an uncanny encyclopedic knowledge of 80's and 90's pop culture.  Todd Collins is a guy you'd want on your trivia team.

Todd Collins' asthma has also driven him to be somewhat of a health nut.  He hated the feeling of being sick and helpless.  As an adult, the drive to take care of himself led to him becoming a certified personal trainer, a once avid swimmer, kick boxer, and Brazilian Jiu Jitsu player.

Potato chips are one of the few "bad foods" he regularly eats.  Todd Collins put bad foods in quotation marks because he feels there are no bad foods, just bad decisions.  Boom!

Todd Collins once rescued several woman from getting mugged by a wacko with a knife in Redondo Beach.  He has the scar on his forearm as a reminder.

Todd Collins very badly burned his forearm making fish tacos for his ex-girlfriend and her children.  He tells people he got the scar from this incident by saving a group of women from a wacko in Redondo Beach.  It sounds way cooler.

Aside from being the Chip Mack, he is also an avid cook.  Todd Collins developed his skills working from home as a Realtor with Re/Max.  He would work 5 hours a week, with the remaining hours watching the Food Network and cooking for girls he dated.


There are countless other stories and interesting facts to share about The Chip Mack's alter ego, Todd Collins.  He feels these stories are better left to sharing with you in his chip reviews.  Stay tuned for more reviews and stories!


Thank you for checking out his page!